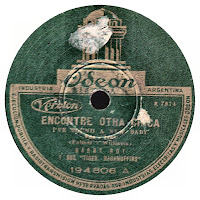 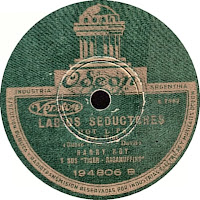 Lee Morse - A Little Kiss each Morning - I Love You, Believe Me, I love You 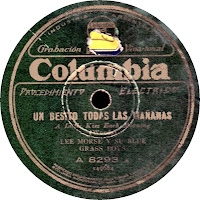 This is a pair of  Columbia recordings made by Lee Morse that apeared in Argentina
In The Columbia A-series:

Lee Morse (born Lena Corinna Taylor in 1897) was a singer with an unusual way of singing, and also an unusual voice, and some of his records are listed in Brian Rust’s “Jazz Records 1897-1942”. This item in particular is not listed there but as sometimes
the inclusion or not on it as a jazz record is a bit personal, I hope many jazz fans will like this performances, that for many may be new. Enjoy!

Boots And Saddle - I would do anything for You 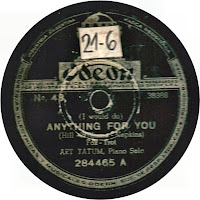 This particular tune has appeared in 78 form only in Argentina in Odeon 284465. I think it has been reissued on Cd somewhere but, of course, the only source for this is the Argentine Odeon pressing presented here, and, by the way, is not a master pressing, as it has the small etched matrix Nº 90541-A as opposed to the italic etched numbers that denote a master pressing. This was recorded on Dec. 21, 1935, and I don’t know the reason for this being a dub, as other decca Art Tatum records on Odeon are matrix pressings. Anyway, no matter what it’s a dub, the sound is pretty good even considering that. It’s a high quality dub, no question about it. 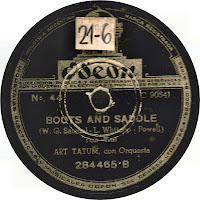 The coupling of this record is “I would do Anything For You” recorded Oct. 9, 1934.
This record has a peculiarity that I mention in its commentary, so check it also.

“I would do anything for You”: 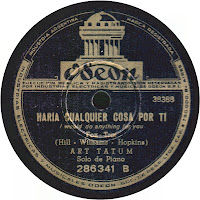 This tune is coupled with “Boots and Saddle” that I also comment in its section, but the thing about it is that this tune also appears on Odeon 286341-B (38388-C), a record not mentioned in Rust’s discography even in the last (2007) edition of it. Its coupling is “Indiana” (DLA 2071) recorded July 26, 1940 and for this title in fact Rust mentions this Odeon release. Well, if he received the  data about Odeon 286341 ¿why he didn’t got the data about the two sides of the record?  It’s kind of a mystery that I will let you people solve if you may.

Los bambucos - You're driving me crazy 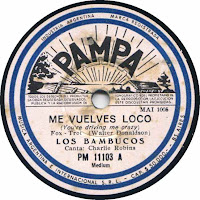 e of this group doesn't suggest anything related to jazz, but , as can be heard, they play quite good jazz of the period. The vocalist is Charlie Robbins and the record was recorded on January 16. 1953 in Buenos Aires and pressed by Pampa,what is believed to be a subsidiary of the local Odeon label at that time. 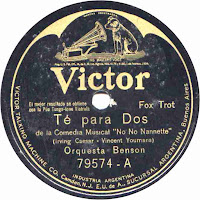 This is an strange coupling of The Benson Orchestra Of Chicago, labeled "Orquesta Benson" . "TE PARA DOS" is, of course, the very well known "TEA FOR TWO", and this rare copy of Arg Victor 79574-A couples this Benson item with a tune by Adolfo Carabelli y su Orquesta, a local band . This acoustic recording was made 28 August 1924 in NYC.